For our first anniversary, and our honeymoon, Anna & I went to Costa Rica. We just got back on Wednesday. It was an incredible time. Costa Rica is a beautiful country, and everyone we met was very friendly and outgoing. I think my favorite thing was all of the cute or amazing animals. Also, lots of the restaurants were hardly even "inside". They were mostly open to the air, although covered, so sometimes frogs or kittens would be hanging out with you while you were eating.

I had heard a lot of good things about Costa Rica, and I can wholeheartedly echo them all! Here are some photos below. Don't worry, we've already taken out repetitive pictures and cropped them :)

We went during the rainy season, but it actually didn't rain on us except when it didn't really matter. When we were in the hot springs, it started pouring, but it was really warm rain, and it just made the experience of the hot waterfalls all the more intense. On the colder side of things, we also went whitewater rafting, and that was the only other time it rained while we were actually doing anything, so again it didn't really matter. We did get kinda lucky that it didn't rain while we were on the beach and stuff.

Some random surprising facts about Costa Rica: Intel's microprocessor facility in Costa Rica is responsible for 20% of Costa Rican exports and 4.9% of the country's GDP. They actually make a lot of money from high tech and from tourism.

After fighting and winning a civil war, a rebel force abolished the army elected an assembly, wrote a constitution, gave Blacks and women the right to vote, and then the rebel junta stepped out of power and Costa Rica became a democracy. Wow.

On our first few days, we were in La Fortuna exploring the rain forest, relaxing by the pool, watching the live volcano erupt, and riding some ziplines. We also visited some hot springs which were awesomely beautiful and relaxing.

Our first day in San Jose, we went to a butterfly garden. The tour guide seemed very into the butterflies. When she would pick one up, she would gently blow on it, and when Anna asked, she said it was just to say "hi" and to relax the butterfly. 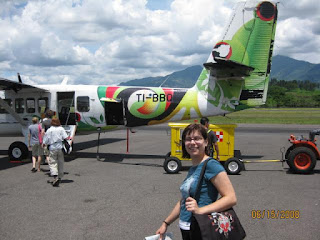 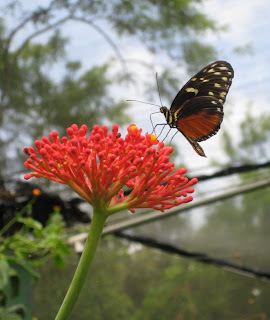 We flew out of San Jose to La Fortuna on this little airplane. No security, no bar codes on the boarding passes. No flight attendants.


Here's me with some Iguanas. This tree was covered with them. Costa Ricans call them "Tree Chickens" because they taste like chicken. By the way they love telling you this, I must have heard that joke like 5 times. They don't eat them anymore because they're protected, and the population is therefore increasing again. 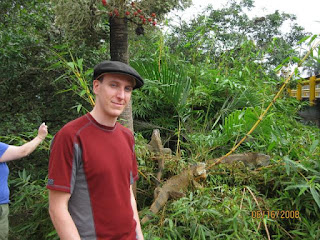 In La Fortuna, we went on a boat on the Rio Frio and saw lots of animals, including several howler monkeys, this cayman alligator, as well as lizards who could walk on water, lots of birds, etc.

The howler monkeys make a really cool, really loud noise that sounds like a huge gorilla or something, but they're really pretty small. Wikipedia says they are the loudest land mammal. 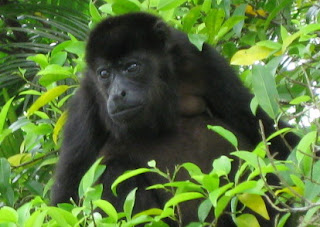 La Fortuna has a big, active volcano, and we got to watch it erupting a bit, especially while we were doing these zipline rides. By the way, the ziplines were fun, but I wouldn't recommend them as being particularly interesting. They were billed as a kind of canopy tour, but really they were more like an amusement park ride. 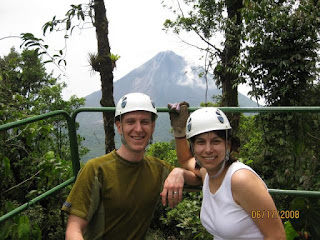 A pair of Macaw parrots lived in our hotel and this one beat me at foosball. Apparently they mate for life, according to wikipedia. These two were never apart whenever we saw them. Also, one of our cab drivers lived nearby and said he is in a battle with those parrots and they hate him. They did have a LOT of attitude. 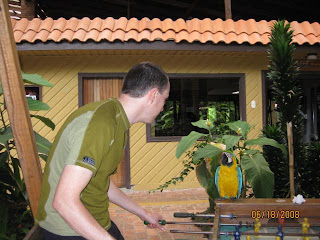 After La Fortuna, we flew back to San Jose, and then drove to Manuel Antonio where we toured the national park. This was the most amazing animal viewing we did. Our guide had this tripod-mounted monocular or telescope or something, and he would spot tiny or distant animals and set up the telescope to let us view them.

Most of the time, we would try to spot whatever it was, a tiny frog or group of bats or something with the naked eye, and we couldn't see it because these animals all have great camouflage. Several of these pictures were taken through that lens, which is why they have such high resolution. 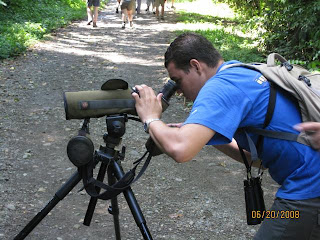 This is a three-toed sloth, which are hard to spot and very slow moving. Anna actually spotted one on her own at our hotel one day. Mostly, they look like a ball of fur, but with the telescope, we could actually get a look at its face. I still can't actually figure out what a sloth looks like altogether because all of the photos of them just looked photoshopped to me. Like, where is that arm coming from?! 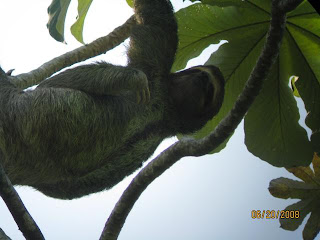 This frog was tiny and hard to see :) 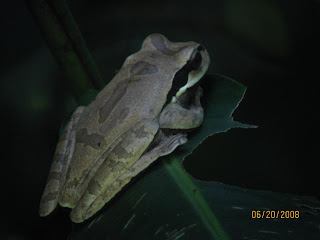 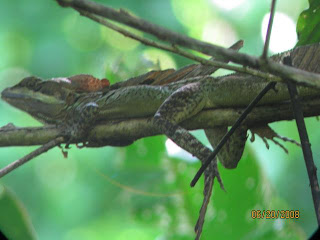 One of my favorite animals was the capuchin monkey. They were so cute and curious, and they were kleptomaniacs, but they didn't steal anything from me. A few days later, we got to watch an entire troupe move through the forest while we were kayaking, and they came over to check us out, so we got to see them really close. It was really fun to watch them jump around between the trees and run across the ground. We also saw a little baby all alone following the big group, but a minute later, mom came over and baby climbed up on mom and they zoomed off. 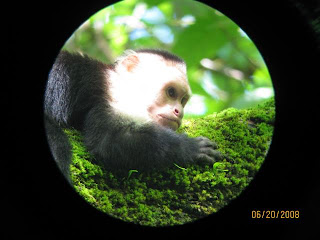 Their faces look so old and wise and mysterious, but then they act like little kids. Some stupid tourist was feeding some of them (which is really bad for them) and she was teasing them with a banana. When he didn't get the treat, one of the monkeys ran over to someone's backpack and reached into the pocket and tried to grab something, but someone chased him away. 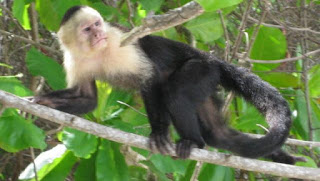 This was while we were on the beach, and there are all kinds of things trying to get you and your stuff. We saw that monkey try to grab something, we saw a raccoon trying to get into a bag, not to mention the thieves that we didn't see but were warned about approximately 100 times. Also, there was a poisonous tree on the beach with a sign saying not to sit under it. In Spanish, this tree is called manzanilla de la muerte, or "little apple of death". The Iguanas can actually eat the fruits, though.
Here's a beach photo. We swam in the warm waters a lot. This was on the pacific side, by the way, not the Caribbean. 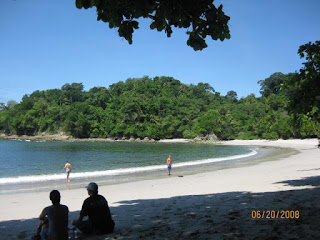 Our hotel in Manuel Antonio was so beautiful. Definitely the nicest place we've ever stayed in. The room even had an etched window. Most everywhere we went, except San Jose, looked this lush. Costa Rica is kinda like Portland in that it gives the impression that if you stopped fighting off the plants, they would just take over. 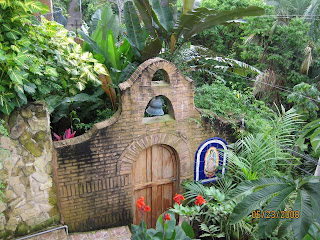 After Manuel Antonio, we drove back to San Jose in a rented car. This was about 200km, and the roads were insane. They were really winding, and everyone wanted to pass everyone all the time. Also there were features like dirt roads, and the roads didn't have names mostly.

Then there were these insane "bridges" that weren't originally meant for cars but for trains, where you'd have to wait for 10 minutes to cross because there were folks crossing in the other direction. To the left, you can see that they're building a new bridge, which is like half done, but it looked better already than the one I was using!

There were lots of school kids out in uniform and lots of people on bikes in all kinds of weather. These two look like they're having a great time. 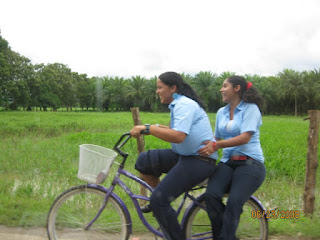 Lots of love,
isaac & anna
Posted by SyntaxPolice at 6:52 PM No comments: