This weekend, Anna and I took a cycling trip to Carson, WA, along the Columbia River Gorge. Carson is about 55 miles away, so the total trip distance was 110 miles, but we spread it out over two days, with a day of rest in between.

What did we do on the rest day, you ask? Well, we got excellent massages and otherwise did basically nothing. We stayed at Carson Ridge Cabins which we can highly recommend! (@carsonridge on Twitter.)


The ride we took was a variant of the "Bridge of the Gods" ride from Rubber to the Road, except they expect you to do that ride in one day :) The above mural is on one of the supports of the bridge itself.
The original inspiration to go to Carson was from this book, but I had previously found some sections of Highway 14 too stressful. Rubber to the Road routes you around that nicely.

Directions: We modified the route slightly to start out our front door and wind up at Carson Ridge Cabins. You can follow these directions exactly, except instead of turning off of Highway 14 to cross Bridge of the Gods, continue on 14 for about 6 miles, fork Left at Wind River Highway, and continue for about 0.7 miles to Carson Ridge Cabins on the left.
Day 1: On the way there, we were mostly on the Washington side of the Gorge, which is very nice. The roads have relatively good shoulders for the most part, but it could sometimes get a little tight. There is definitely a bit of climbing the first day, but nothing too bad!
Day 2: As I mentioned, we were very pleased with the cabins we stayed at. The rooms themselves were great, breakfast was great, and the hosts were friendly and interesting. The small town was short on yummy food on a weekend, and we didn't feel like biking down to the next nearest town to get food.
We got massages which were very nice after such a long ride. They even came to the room, and then we took a long nap (definitely an advantage of having a massage in your room) :)
Day 3: The way back is mainly on the Oregon side after crossing the bridge. The return trip was stunning! After crossing the bridge, you ride for about 6 miles on a bike path through the woods, which was just an absolute joy. We had to ride along 84 for two miles, but that wasn't too bad. The shoulder is huge and it is pretty brief.

We took a bit longer on the way back because we were taking photos. Multnomah Falls is along the way, and since you're mostly along the Historic Columbia River Highway, there are plenty of parks and waterfalls to see.

After the falls, there is some steady climbing up Crown Point to the Vista House, where there are some pretty amazing views. I should emphasize from the below photo that we rode from before Beacon Rock (in the distance) and up from the level of the river. I actually didn't tell Anna that we were going to climb all the way up there :) She did awesome! 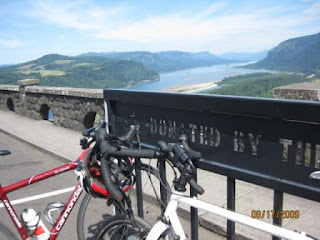 After reaching Portland, we rode along Stark and Burnside for a while with a good bike lane, and a bit of a headwind for us.

Overall, this was an excellent, challenging ride for the two of us. I can highly recommend it! Drop me a line if you want any advice on trying this route.

Speaking of the Gorge, last weekend, we did another ride in the Gorge, this time from the book version of Rubber to the Road Volume 2. It's called "Mt. Hood Orchards". The book lists it as 83 miles, but you can cut it to 40 by taking Baseline Road to Hwy 35, as we did. I recorded the route with the GPS on my Android phone for anyone interested.

As the book says, there are great views of Mt. Hood, which are pretty different from the Portland-area views.

I can imagine working this ride into a several-day cycling trip to the Columbia River Gorge. The "Hood River" ride is about 30 miles from Carson. One problem is that the bridge between White Salmon and Hood River is off-limits to Cyclists, if I recall correctly, and I don't know if there's a good route on the Oregon side.

Overall, absolutely perfect little vacation. Everything went very smoothly, no mechanical problems, no significant problems with the route. I got panniers for my bike, which worked out nicely. As anyone who follows me on Twitter can tell you, I'm definitely LOVING the rides from Rubber to the Road, and recommend them very highly. You can even import the routes onto an Android phone :)
peace!
Posted by SyntaxPolice at 6:41 PM